Took my brother and his wife, over from Australia for a few weeks, to How Hill at the weekend to see Toad Hole Cottage and the Secret Garden. I was disappointed not to see Swallowtail butterfly but we did catch up with some interesting dragonflies and damselflies, including possible Willow Emerald. 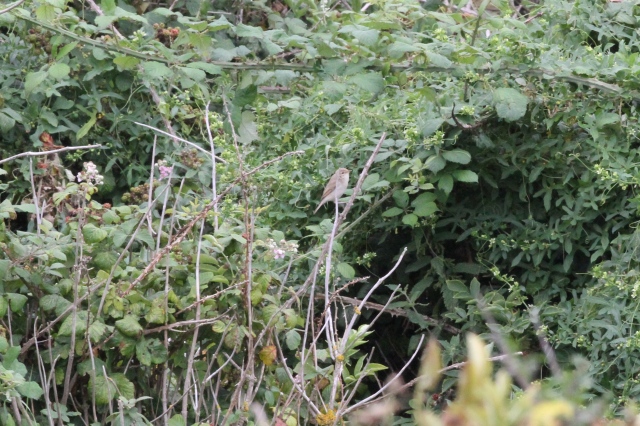 Autumn migration got off to a good start on the Norfolk coast this weekend, with a reasonably obliging Booted Warbler, which was found late on Saturday morning. As we still had ‘house guests’ from my week-long 60th Birthday Bash, see Aylmerton Nature Diary for the full story, we weren’t able to go for it until late on Sunday afternoon. As we walked towards Gramborough Hill, in the stiffening easterly wind and thickening sea fret, there was a female Wheatear on the grazing meadow fence – surprisingly, my first of the autumn. There was a small group of a dozen or so birders staring into the large clump of bushes when we arrived, apparently the Booted hadn’t been seen for a while but there was a handful of Willow Warblers and an Icterine Warbler, showing periodically. The Icterine appeared almost immediately, but only fleetingly, as it flew between clumps of undergrowth. Eventually the Booted also popped up out of the big clump, flew over to the bramble patch and perched up, before disappearing into cover. It did reappear, low down in brambles, before flying back to the clump of Elder and was lost to view. Several Pied Flycatchers provided a welcome diversion, before they flew off towards the village. I didn’t get to see the Redstart or Wryneck which had also been reported earlier.

Yesterday was ‘duty day’ at Cley NWT. The morning started off well when a Temminck’s Stint was found on Pat’s Pool, together with four Little Stint. Later in the morning I came across a Purple Sandpiper. I saw twenty species of wader during the course of the day but, alas, the reported Terek Sandpiper at Salthouse never made it as far as Cley. Oh well, not a bad day and a pretty good start to autumn migration!

Wood Sandpiper – one of ten reported at Cley on Monday

I had a spare couple of hours yesterday and, although the weather wasn’t particularly conducive to butterfly hunting, I decided to head down the coast from Cley to the site of an Iron Age Fort and home of one of Norfolk’s scarcer butterflies – Chalk-hill Blue. By the time I arrived the wind had picked up to quite a stiff breeze and the sun was well and truly hidden behind the threatening clouds. Nonetheless, as I dropped down into the moat, I soon disturbed the odd insect, resting down amongst the grass stems. As I slowly made my way to the more sheltered side of the fort their numbers increased, until there was a veritable cloud of the things flying around! My first Chalk-hill Blues in Norfolk, and what a spectacle!