For those of you interested in ‘local patch’ birding, I’ve just published a brief round-up of the birds seen during the previous twelve months on my local patch, in North Norfolk – posted on the second anniversary of my Aylmerton Nature Diary blog – just click this link. 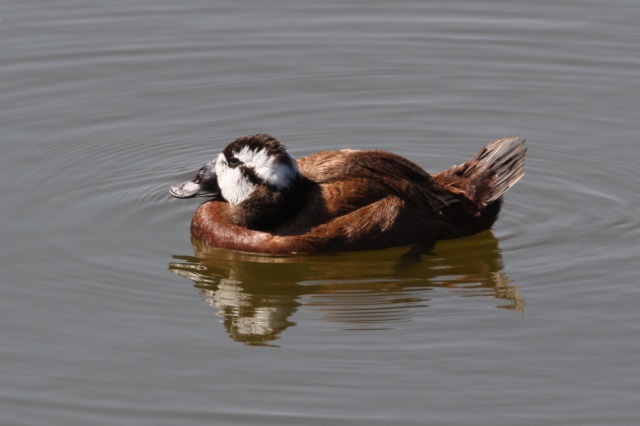 White-headed Duck – iconic species of this part of Spain

We’ve just got back from a two week holiday in Spain. The first week we spent with Joe and Gabi, who were over from Chile for a month, touring the delightful hill-top towns of Andalusia – eating, drinking and catching up. The second week we spent birding with Jake, our youngest son and our long-time birding friends, Bob and Sue. As has become our custom over the past few years, we stayed in the old town of Tarifa and amused ourselves visiting the various birding hot-spots of the region. The only draw-back this year was the weather, with strong easterly winds for the first few days and unseasonably hot temperatures – reaching 43 degrees on a couple of days. Nevertheless we still managed to clock-up over 170 species, the highlights of which included White-headed Duck, Red-knobbed Coot, Common (or Garden) Bulbul, Rufous Bushchat, Bald Ibis, Lesser Short-toed Lark, Black-shouldered Kite, Little Swift, Eleanora’s Falcon, Red-necked Nightjar, Black Wheatear and a trio of ‘escapees’, which were all new for our Western Palearctic list  – Monk Parakeet, Yellow-Collared Lovebird and Black-headed Weaver. The raptor passage was the best we’ve ever experienced, with hundreds of birds most days – usually involving Honey Buzzard, Black Kite and Booted Eagle, with notable numbers of Egyptian Vulture and Short-toed Eagle. Passerine migration was also heavy with several ‘falls’ encountered, mostly involving Redstart, Pied and Spotted Flycatchers and Willow Warbler. Prize for the oddest bird however goes to a near-completely albino Bee-Eater, seen briefly with hundreds of regular birds, near Casas de Porro. 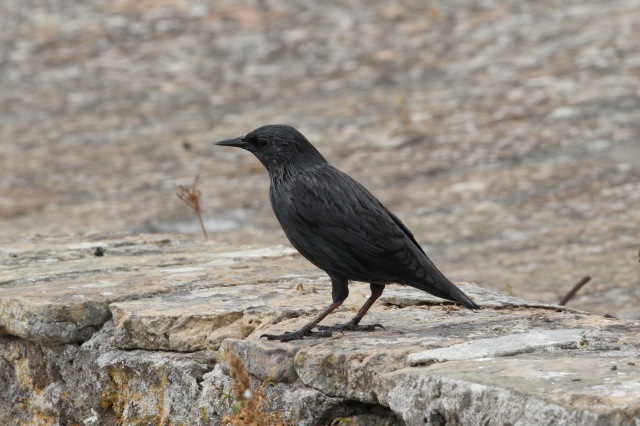 Little Swift, much less common – a few pairs breed along the coast between the Coto Donana and Tarifa. We saw an unprecedented flock of eighteen near Chipiona 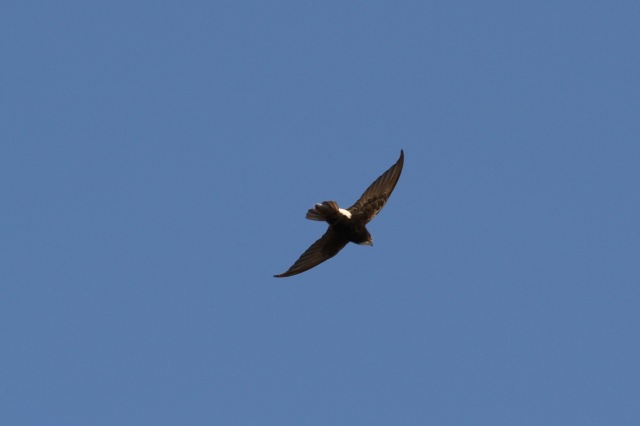 But it’s the raptor migration over Tarifa which is the big draw at this time of the year – 2016 was an excellent year. This pale phase Booted Eagle was typical 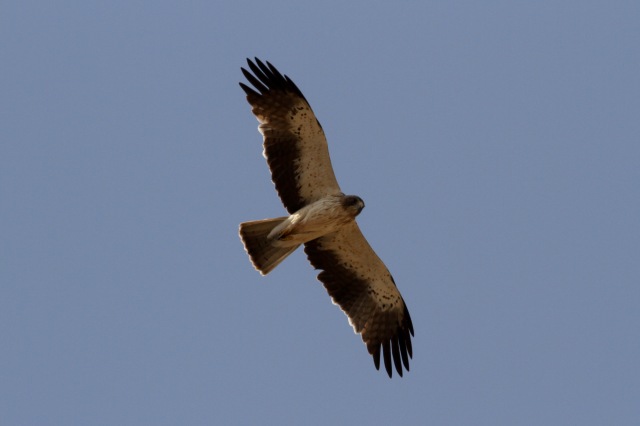 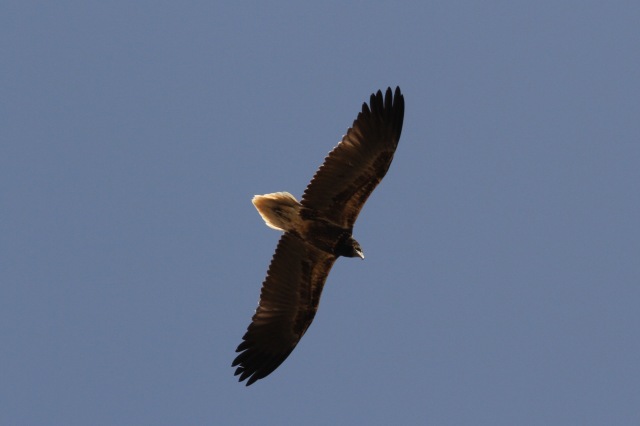 La Janda ‘produced the goods’ despite the water-levels being high – including a variety of waders, heron sp. and this obliging male Montagu’s Harrier, eating a Crayfish 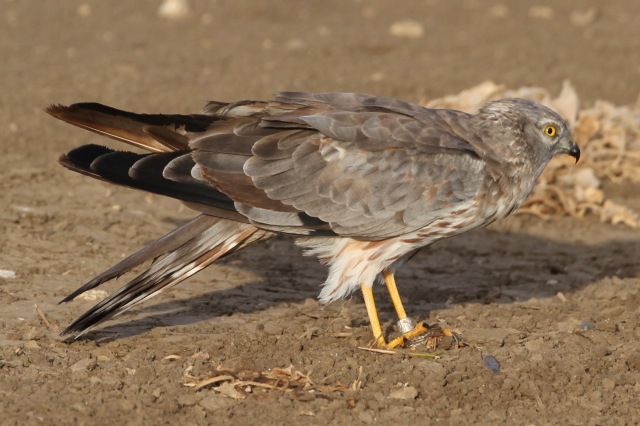 This year we decided to go to look for Bald Ibis from the successful release scheme. Here is one of the staff involved in the project, with some nifty head-gear

and here are some of the increasing population, seen near Barbate

It’s not all about rare and scarce birds either – some more common species gave excellent views. This Stonechat for instance 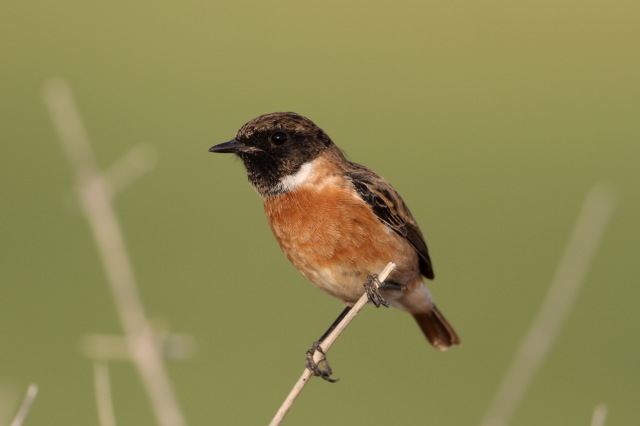 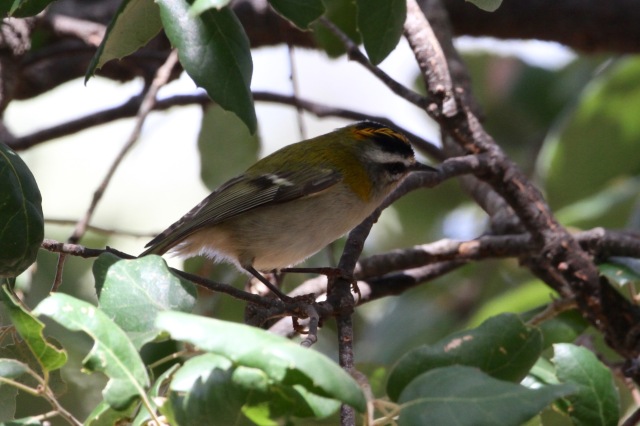 Black-eared Wheatear are always a ‘crowd-pleaser’ 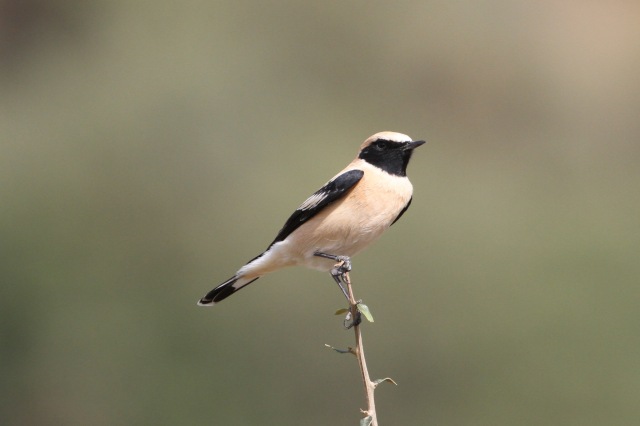 To finish with, a couple of the less easy to catch up with species of the area. Common (or Garden) Bulbul – one of Europe’s rarest breeding species. Seen near the public car-park in Tarifa

Azure-winged Magpie, are very difficult to find in Andalusia – we travelled to Antequera to find this species

Red-necked Nightjar – more common but difficult to find some years. This one was roosting by the side of the track at La Janda

Finally, just a few of the many hundreds of White Stork, forced down by strong winds on La Janda, during their long migration south 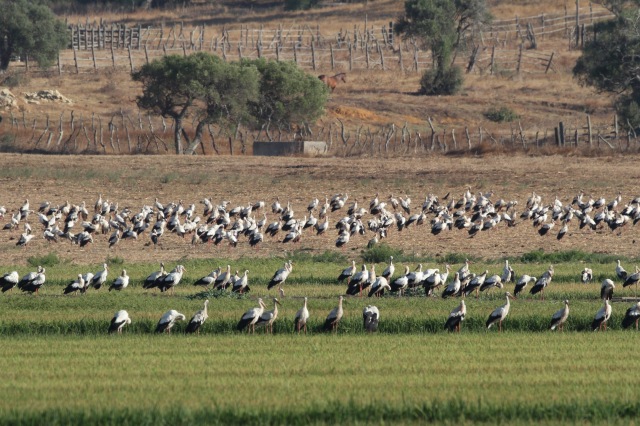 Another great ‘do-it-yourself’ trip to this top European birding destination, made all the more easy through John Cantelo’s excellent website and site guide.