This summer has been exceptional for the number of rare birds in Britain, one of which is Bridled Tern – a species from as far afield as the Red Sea and Caribbean. With less than thirty previous records and the last long stayers being in the mid 90’s, this was a ‘must get’ species. Unfortunately for us, when it first turned up on 1st July on the remote Farne Islands, we were busy all week and the following week we were off to France to watch Le Tour. During that first week it settled to something of a routine, regularly coming to roost during the afternoon and evening, when there were plenty of eager boatman willing to ferry the throngs of twitchers out to the islands to see it. By the 5th it had become much less predictable and began visiting a number of mainland sites between  Northumberland and Teeside. On the morning of 10th it was reported flying south past Flamborough Head, Yorkshire –  it looked like it had disappeared for good. Then to most peoples surprise and our considerable relief it reappeared on Inner Farne to roost on the evening of 13th. We were again busy over the weekend and I had commitments on Monday and Tuesday. With an emergency dental appointment on Wednesday morning, we decided to go for the bird straight after. It’s a five hour continuous drive to Seahouses, where the boats leave, and with any luck we’d be there for mid afternoon, in time to get out to the islands to see it. We phoned the boat people on route to be given the devastating news that the last scheduled sailing was at 12.15 and there was no prospect therefore of seeing the bird that day, it’s fifth consecutive day of settled behaviour! We had no choice but to schedule our visit for the following day and hope against hope that it would hang around for another day! We’d intended to use our trip north to visit Jane’s family in Lancashire in any case, so we reversed our itinerary and decided to return to Rutland Water, to see if the Pacific Golden Plover was around and also to try for the Bonaparte’s Gull at Heysham. We scored on both – seeing our birding pals, Bob & Sue, in the process and spending a very pleasant evening, courtesy of Jo and George (thanks a lot folks!) Yesterday morning we set off early on a lovely drive through the high Pennines, collecting Red Grouse on the way, to reach Seahouses in good time for the crossing to Inner Farne. Fortunately for us, the Tern was back at the roost by late morning – unfortunately we had to join one of the regular tourist excursions which goes around all the other islands before finally landing for an hour on Inner Farne! Anxiety levels rose throughout the afternoon, despite the truly excellent views of the local marine life and the seafaring tales of the captain. Finally we landed and after several tense minutes of scanning the Tern flock  there it was, the fantastic Bridled Tern – ‘planet earth’ tick and a real beauty! After ten minutes or so it went airborne, pursuing a Sandwich Tern high into the Northumbrian skies and we were left to clear up on a couple of other Tern species which had so far eluded us. We’d boarded the boat ready for the return sailing to Seahouses, when a fellow birder saw the bird on the nearby rocks. We were able, curtesy of the obliging captain, to cruise slowly by it on our way home and obtain much better/sustained views.

A nice flight shot of Bridled Tern, with Sandwich Tern for comparison 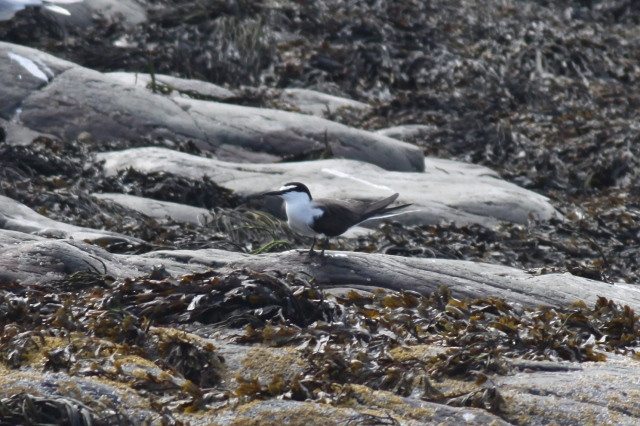 The ‘supporting cast’ for this trip was outstanding. First off was the rather distant but full summer plumage Pacific Golden Plover, at Rutland Water, seen here looking right on the closer bund, with a couple of Lapwing

At Heysham, we managed to relocate the adult Bonaparte’s Gull – a scarce North American visitor, amongst hundreds of Black-headed Gulls, on the rocks at Red Nab. It’s the one in the centre of the shot, looking left!

‘Famous’ they maybe but increasingly difficult to find on the heather moorlands of northern England – Red Grouse. Britain’s only ‘endemic’. 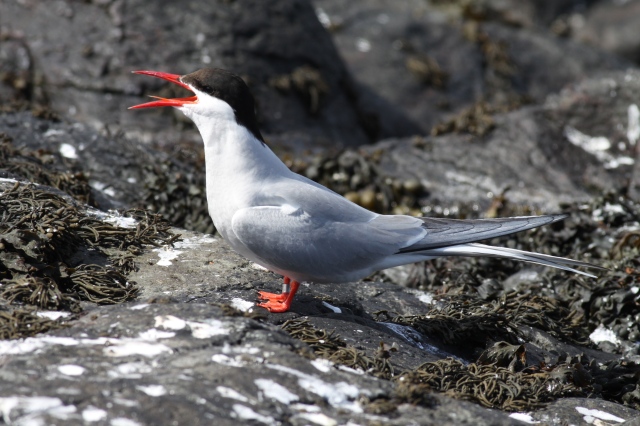 A big thank you to the ‘Angel of the North’ for bringing us luck and allowing us to see the lovely Bridled Tern on our first attempt…we know of  birders who have tried and failed on three or more visits!

Postscript: For fun I thought I’d add a couple of photos of the other ‘black and white’ Tern, on the British list, for comparison. These ‘digipics’ of a Sooty Tern were taken in the early days of digiscoping, on Anglesey in 2005 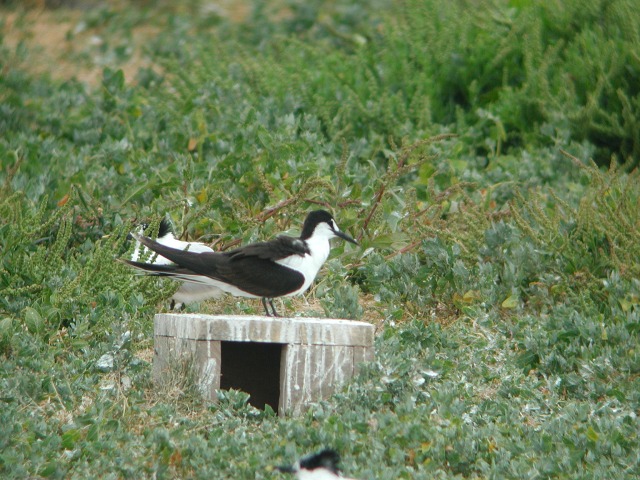 This bird first arrived on Anglesey on 7th July and spent the next 5 weeks commuting across the Irish Sea, visiting various locations along the Dublin coastline, proving at times to be as difficult to see as the Bridled Tern. Now thankfully both are safely UTB and ‘on the list’!

One comment on “UnBridled Joy… and relief! (now with postscript)”