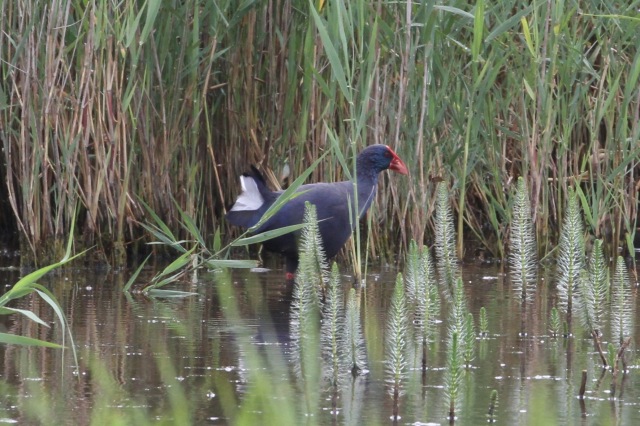 Nearly twenty years ago there was a report of a Purple Swamphen – or Gallinule as they used to be called, somewhere on the River Ouse, near Ely. Excitedly, we dashed off after work to twitch it –  after all, even in those days, this was a very scarce bird in southern Europe and an unthinkable addition to the British list. We needn’t have bothered as it turned out to be an escape, of the Asian race I think – still, a nice bird all the same!

It was with some scepticism then that I read the first pager message at the weekend of another Purple Swamphen – this time at Minsmere. However, with a recent bird in Brittany and other sightings in eastern France, momentum for this bird being accepted as a ‘first for Britain’ began to build. Monday we were tied up  at Cley NWT and yesterday morning I was doing some planned conservation work on our local village pond. We set off for Minsmere after lunch, arriving there amidst sunshine and showers. The bird was being reported on a regular basis on RBA and our confidence levels were high. The usual gleeful tales of ‘it’s still there’ and ‘showing well if you hurry’ greeted us along the path to South Hide – from where, incidentally, I saw my first Stilt Sandpiper. We got to the spot and indeed it was still there and showing well! Well briefly in the reeds before going missing for ten minutes at a time, that is, only to reappear further along the reed bed. We watched it in the late afternoon sunshine for a hour or so before heading home and fish’n chips. A very nice bird and, hopefully, a British ‘tick’ in the making.

A few more record shots of this rather smart bird 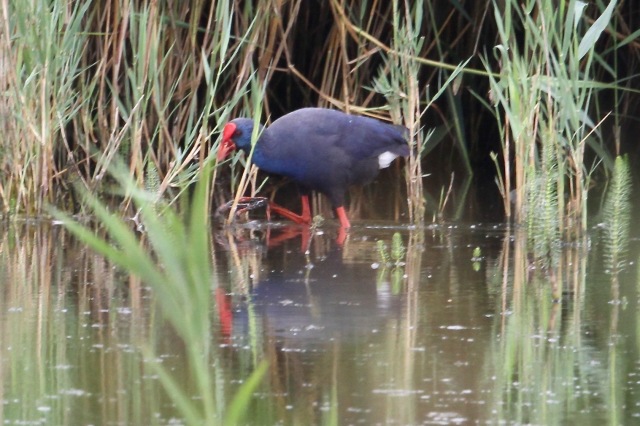 For a slightly better photo of Western Purple Swamphen, go to my blog ‘First foot in the Algarve’ – featuring some of the better birds seen on a recent trip to Portugal.