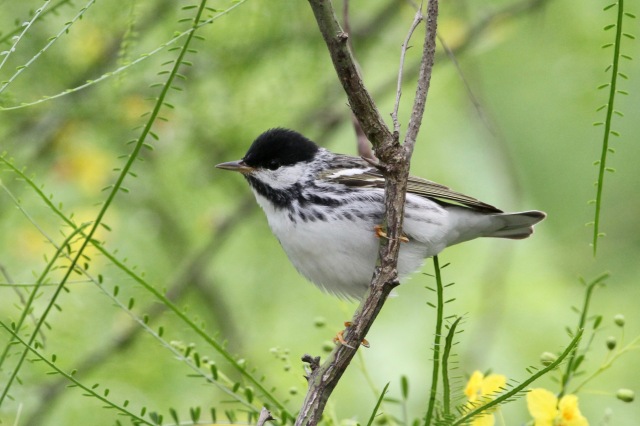 Blackpoll Warbler – one of the species involved in todays fall-out. A US tick

Today it was back to the Gulf of Mexico for our last session of coastal birding before we get to Monterey, California, in a months time – South Padre and Boca Chica beach being our chosen locations. No birding holiday though would be complete without a trip to the rubbish dump – Brownsville in this case, to look for the elusive Tamaulipas Crow. This extreme US rarity had been absent for the past thirty five years but has reappeared recently at the dump. Unfortunately we dipped, so it was on to the Convention Centre, on South Padre Island, to look for shore birds and, hopefully, the odd migrant. It was evident as soon as we’d arrived that there was a minor fall-out occurring – when, due to the weather conditions, migrants crossing the Gulf ‘fall out of the sky’ on reaching their first  bit of land. Several species of warbler, vireo and oriole were flitting around the landscaped gardens of the Convention Centre and new birds were arriving all the time. Nothing particularly unusual but we did get close views of several of the species we’d only glimpsed at High Island. The shorebirds on the other hand were unremarkable and we added no new species. After lunch, with new arrival continuing, we went to the incredible birding ‘yard’ at Sheeps Head Street. This tiny former housing plot / garden is only about 30m square but is a magnet for migrants. In the hour we were there we saw four species of vireo, seven warblers, orioles and buntings – all at close-quarters. Our afternoon visit to Boca Chica only added a couple of new birds but the wader, duck and gull passage north, along the Gulf shore, was interesting to observe.

A selection of the warbler species seen at the Convention Centre & Sheeps Head Street. This one is Black-throated Green 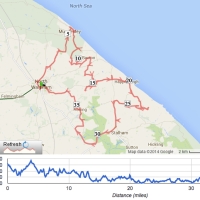